This is me waiting – watching – anticipating. 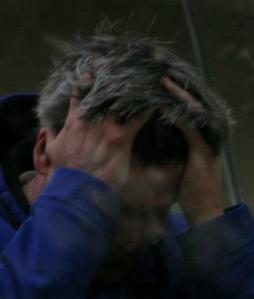 I am waiting for my son.
I am watching him prepare.
I am anticipating his jump.

The anguished expression is born from knowing he can make the jump – and knowing he might just as easily miss it – so really, it’s an expression born of not knowing – Not knowing in that brief span of time – as he begins his measured approach – increases his speed towards the bar – right up to that instant when he explodes off the ground – whether he is going to succeed or fail.

For the high jump, the task at hand is literally directly in front of you – you cannot rely on teammates to pick up the slack if you are having an off day – it is just you and that bar.

For the parent that is waiting, watching, and anticipating – the time feels especially compressed and pressurized. If there were a lump of coal in my stomach, by the time it takes my son to complete a single jump, I would have a well-formed diamond in my upper intestine.

In the grand scheme of things – when viewed against a world where kids my son’s age are blowing themselves up, or fighting for their country, or struggling to just get through a day – these moments border on absolute meaninglessness – but for those few seconds leading up to his jump – there is nothing more important in my world than my son getting over that bar. Nothing else matters – all activity around me gets blurred out and is pushed to the periphery. I exalt in his victories and suffer in his losses.

For my son’s first and final year of indoor track – these moments of anguished anticipation were almost always followed by elation – but there were a handful of times – including yesterday’s state meet – where the anguished anticipation was followed by an almost overwhelming disappointment and sadness – and you Jacob Reilly, handled every victory with humility and every defeat with grace – I could not be prouder.

You still have challenges in your high school jumping career – regionals and nationals just around the corner – and then your final season of outdoor track and field – and maybe even a collegiate career. And though you will surely learn a lot more about technique, conditioning, and training, it seems to me that you’ve already learned the most important lesson of sport.